The original home of the Pimento tree is the beautiful tropical Central America, e.g. Cuba and other islands of the Caribbean. It is said that the Aztecs refined their cocoa with the aromatic spice. The first Spanish explorers first mistook allspice for pepper and called it "pimenta", Spanish for pepper. The spice came to Europe with the Spaniards in the 16th century. Today, allspice, also known as pimento or Jamaican pepper, is used in kitchens all over the world.
Attempts to naturalize the pimento tree on Java and Sumatra were not very successful. Today, the main cultivation areas are in Central and South America such as Jamaica, Barbados, Cuba, Leeward Islands, Guatemala, Honduras, Mexico and Brazil.
The young pimento trees are cultivated, rarely from cuttings that bear fruit for the first time in the 7th and 8th year. By the age of 15, the tree reaches its full load-bearing capacity, which it retains up to 100 years old.
The berries are harvested with a diameter of 5 to 8 mm shortly before full ripeness, because at a later point in time pimento grains have almost lost their characteristic aroma. After harvesting, grains are dried in the sun for about 7 to 10 days and then removed from the stalks.
The color varies between dark brown and reddish-brown-yellow, the surface of the seed is warty-rough. The yield of a large pimento tree is about 45 kg per year under favorable conditions.

Pimento tastes sharp, similar to pepper, and at the same time of cloves and cinnamon. There is one exception of course: In Christmas baking, the warm aroma is desirable.

Hardly any of the classic Christmas specialties in which this exotic spice is not used. Be it speculoos, printen, mulled wine, gingerbread or the English Christmas pudding - unthinkable without the warming pimento aroma.
Pimento is also frequently used in Caribbean, Arabic and Indian cuisine. In the Caribbean, local pimento is a very common ingredient and a popular ingredient for the grill marinade of meat, fish and poultry as well as many other seasoning sauces.
To get the full aroma, buy whole berries and crush them in a mortar. 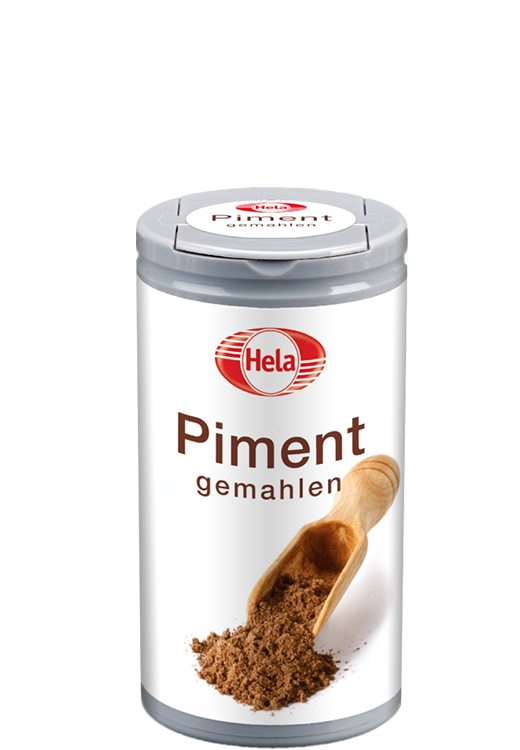 Ground Allspice
Spice-Library
Filter the selection
Filter by first letter: A to DE to IJ to MN to QR to UV to Z